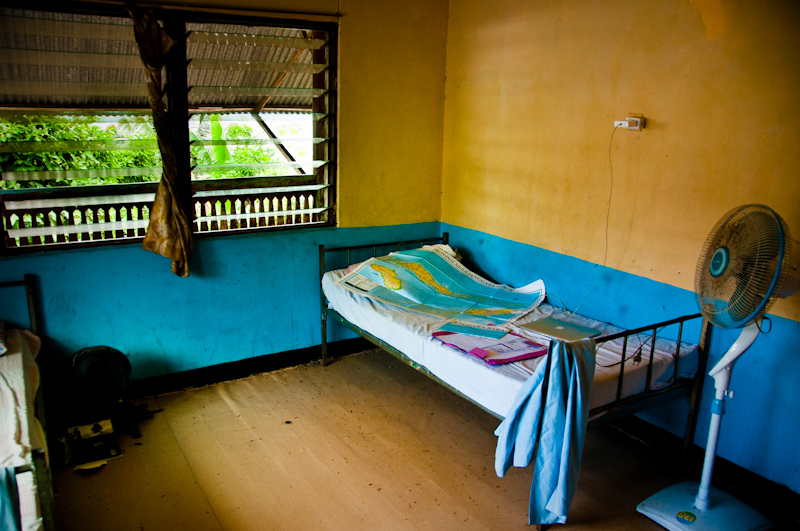 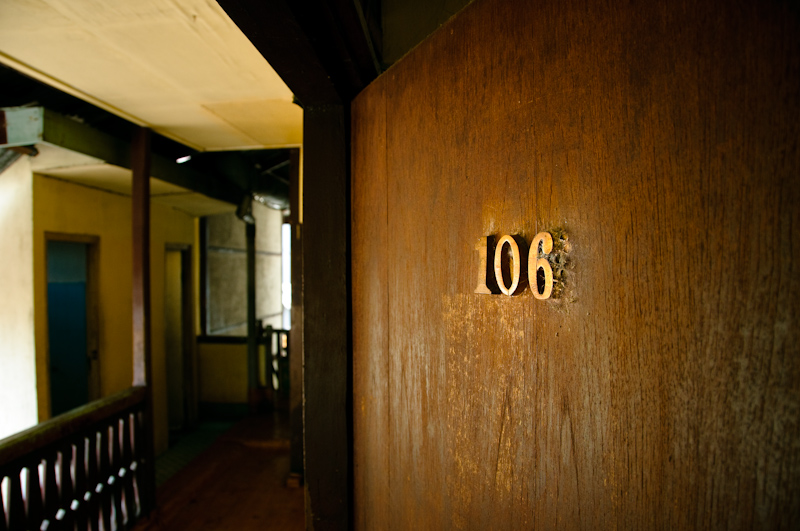 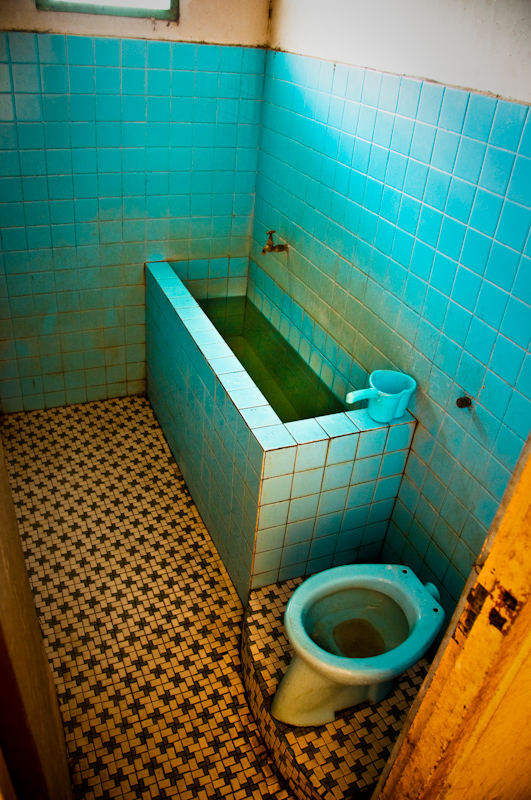 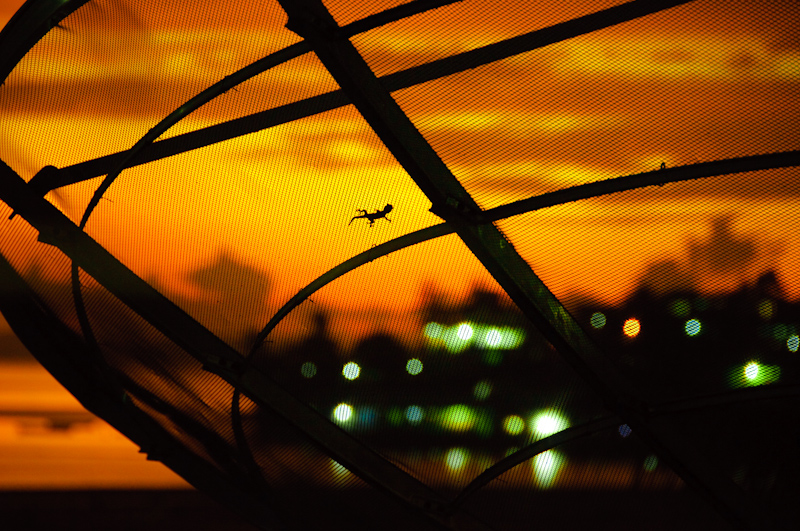 So here I am, in the lovely little town in Papua, named less lovely Fak Fak. It’s scenically stretched on the hills, with its center settled at the sea shore. Narrow streets winding up and down steep hills, one-story colorful buildings, dense jungle behind. What adds to its charm is a complete isolation, one may only get here by boat and wait for an undefined time for the next one to get out. That is exactly what I’m occupied with. Not without pleasure I must admit.

For almost a week now I managed to set myself with a favorite dinner place, avocado juice stall, making friends with bakery owners and finding myself a lovely place to stay. Old wooden building overlooking a bay, with a stunning sunset reminding me every day that yet another day of my visa passed. My spacious room is located on the second floor and equipped with a massive terrace. That’s where I’m sitting right now, watching mentioned sunset through the balustrade with two rats sitting on it. Cause I am not alone. Although I’m pretty sure I’m the only one bringing any profit to this forgotten by gods and people hotel. Fak Fak has not seen many tourist, so my first days went by with excursions of Fakfakans to my balcony. On the bright side hotel’s staff is 24/7 occupied with pleasing me, exotic visitor, with whatever they imagine I might need. Loud music, company, checking my computer screen over my shoulder being their initiative. Changing bedding, refilling water in the bathroom and installing a door locker being joyfully done on my tactful suggestion. Summa summarum both parties try to be culture-clash sensitive and put as much effort in not offending as in understanding each other. With different results.

On the first evening I could not pass to the toilet due to rat’s party in the big trash bin standing on the way. I weighted a moment all the possible solutions and decided there is no way I can pass the bin without touching rat’s fur (if only fur). I went calmly downstairs to get help. Manager jumped on my sight in readiness to respond and we had a following conversation in Bahasa Indonesia:

Kasia: Excuse me. There are rats in the trash. Can you help me please?
Manager: What? (it sounds so much better in Bahasa  – “Apa?”)
Kasia: There are rats in the trash. Upstairs. Toilet. (no reaction) Rats. I afraid. Big. Big rats. Same cats. Can people move the trash? If not a problem. I’m sorry.
Manager, with emptiness in his eyes indicating understanding particular words, but not making any sense of the overall meaning whatsoever: No problem, no problem. What’s the problem?
In the meantime we gain audience. Everybody focused on understanding Bule’s¹ problem. With involvement worth better case .
Kasia, not intimidated by the crowd: There are rats. Many rats. Maybe bite. Big big rats. I afraid. Rats not afraid, sits in the trash. No problem, can sit, but can I please have trash move. Can’t go to the toilet.
Manager: Ooo, Mister want to the toilet?
Kasia: No… Yes! Yes, want to the toilet. But can’t go. Afraid. There are rats. Afraid rat bite me. Not far. Rat not far. I go, rat bites.
Audience expands to about 20 people.
Manager: No, no bite!
Kasia: I don’t know. Maybe bite. Maybe you can move the trash? Can?
Manager: Can. (we’re still not going anywhere) No no bite. No problem. (with an obvious relief that I’m reading as “the problem solved”)
Kasia (loosing hope): BUT THERE ARE RATS.
Manager (with pride): OOO, MAAAANY! Many rats here. Everywhere.

Just so I wouldn’t think that Fak Fak lacks anything. On the contrary, there is plenty of everything. Including one guy having a dugong in the front yard (later about that).

Anyway, accompanied by the whispering crowd (oh, afraid of rats; of what?; rats; in the West no have; no, no have, but here have, maaaaaany) I went  upstairs with a crew of four and manually showed what I want to be done. Trash has been reluctantly moved about half a meter, I estimated that it gives me a chance to pass it if I’ll be quick and gave up. Over the days I was treating my sight with rats of various sizes walking in big numbers and dealing with my necessity to move around by stepping furiously to scare them. Local staff downstairs must think “Mister maybe white-pretty but walks like an elephant”.

On day four our idyllic, personal space respectful coexistence encountered disturbing changes. I went to make myself a coffee and froze in the door spotting a rat with obvious intention to go through the same door. What followed became a daily ritual. One of them catches me by surprise, usually in the narrow corridor.  We stare at each other frozen and then one of us lose war of nerves and storms. Usually I’m not the one storming, I attended history classes and know that a retreat is a method just as good. Rats obviously had never been introduced to the concept. Or can’t go backwards, I don’t know, the point is that they sooner or later run into your direction. That, regardless of the number of times that it happened, triggers uncontrollable scream on my end. Accompanied by the breakdance alike jump that sets the building in the earthquake alike movement. That, understandably, put whoever’s alive on alert, running towards me in fear. First time I apologized and explained, second and fourth time I did the same but slightly surprised that I managed to trigger the same effect.  There’s been fifth and sixth and many times more.

I don’t know how rats are doing in terms of hearing, but my vocal performance does not seem to traumatize them and cause them to move somewhere else. Their consistency, however,  together with unchangeable reaction of hotel staff, made me introduce some changes in our little ritual. I still can’t control an instinctive scream or setting a house in motion with jumping around, but now I follow with yet another disturbing sound of me running down the stairs shouting “Tida masalah! Tikus!” (“No problem! A rat!”) The crowd get stopped by the bottom of the stairs and comes back to their daily activities. We do that two, three times a day. And how not to love having Mister around?

¹Bule – in Bahasa Indonesia or Bahasa Melayu, foreigner. Used when talking about a foreigner (more polite version Orang Barat, literally translated as A Man from the West). When talking to the given foreigner “Hello Mister” is more common. More than common, you get about 100 hellomister’s a day, depending on the density of population. First you’re amused, then you’re annoyed, then you wake up waiting for your daily portion, ones out of the country you miss your hellomisters terribly. 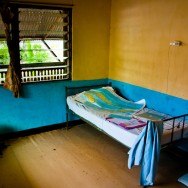 My Fakfakan room. Comes with a beautiful morning light. 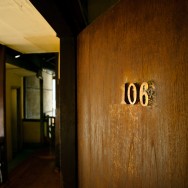 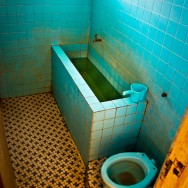 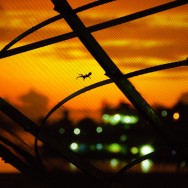 Yet another living creature mesmerized by the sunset